I have always been fascinated by night photography, intrigued by intense colors contrasting against pitch black backgrounds. Relative to my theme of photography as a lens for self-discovery, but without getting too deeply philosophical, night photography symbolizes light prevailing over darkness, good over evil, life over death. OK, I know that was deeply philosophical. But self-discovery requires introspection. So, there you have mine.

Mastering the technical challenges of night photography attracts me on another level. You need to understand aperture, shutter speed, tripods, remote controls, and timing exposures with a stopwatch to produce images that don’t look like you shot an emergency flare inside your bathroom, just before you tripped, while clutching for your phone, to dial 911.

Shooting Miami’s South Beach at night has intrigued me for some time—specifically the architecture on Ocean Drive. Ocean Drive has the best Art Deco architecture in the U.S., the best collection of neon East of Las Vegas, and South Beach is world famous for its night life. If you have seen the film The Birdcage, you get the idea. To someone living in say, Iowa, for example, The Birdcage may seem like outrageously insane fiction. It’s not. Welcome to South Beach.

If you happen to live in Iowa and you’ve never heard of South Beach, allow me to explain that virtually anything goes there. People come from all over the world to party all night long in ways that might get you arrested elsewhere. But in South Beach you are considered normal.

She who is my wife, The Beckster, and I stayed in a hotel room on Ocean Drive several years ago when I dragged her to the Miami Boat Show. Our unassuming room in one of those quaint (hold that thought) Art Deco hotels happened to be positioned directly over the disco. Thumping, pounding, pulsating bass—approximately one pulsation every second—shook the bed, swung the ceiling lamp, and rattled everything not nailed down. Perhaps the CIA was covertly testing a sonic weapon in combination with ongoing LSD experiments.

Not being able to sleep at all that night, I complained to the manager the next morning. Thinking that droll humor might gain sympathy, I asked, “Did you know the CIA was testing a sonic weapon in your disco all night, directly below our room? We weren’t able to get any sleep.” Without bothering to look up from her paperwork, the manager dryly replied, “Nobody comes to South Beach to sleep.” I thought about asking why they bothered to move a bed into the room, but decided to pay the bill and move on. Some people just don’t appreciate the finesse of logic.

Challenge: Shooting South Beach architecture from street level is problematic because of all the stuff in the way: parked cars, street signs, parking meters, tourists, throngs of thongs, and sidewalk drug deals (not a great idea to take pictures of those)—not to mention scantily clad people on 5-foot stilts. The word “clad” in this context being very generous.

Strategy: “I’ll shoot with a drone!” This would allow me to get above all the stuff on the street for unobstructed views of the architecture. What could go wrong?

The difference between brilliant planning and flawless execution is often obscured by a) blind enthusiasm and b) lack of experience overshadowed by more enthusiasm. While I did leave the parked cars and tourist thongs far below, these obstructions were replaced by palm trees, streetlamps, electrical wires, and an occasional seagull—all of which were very difficult to see in the dark while attempting to pilot a small drone from a small smart phone screen.

If you have never shot long-exposure night photos before, there are a few considerations that need additional attention vis-à-vis daytime shots. The aperture needs to be wider to let in more light. But the wider your aperture, the shallower your depth-of-field which makes it more difficult to focus on distant subjects in dim light. The exposure also needs to be longer which risks camera shake. This is why night photos require tripods to stabilize the camera. Otherwise, your image would look like a bunch of fuzzy multi-colored lights, as if you had launched a flare into a South Beach disco.

Because you’re shooting from a drone in mid-air, now add wind as a factor—a stiff ocean breeze off the Atlantic, to be more precise. While my drone (a Mavic II Pro) has a tripod mode, whereby you opt for stability over mobility, that only goes so far. 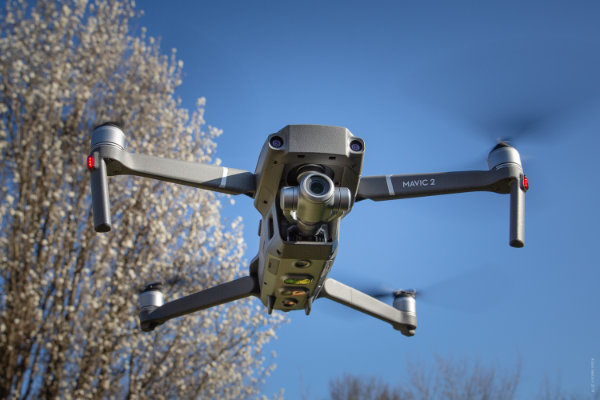 As one would imagine, there are a range of Federal, state, local, territorial, and tribal agencies that want to have a say regarding your ability to fly a drone anywhere, including the most remote iceberg in Antarctica. For my adventure, this started with the FAA, worked its way through the Miami Police Department, Miami Parks and Recreation, and finally down to the guy running the slushy cart adjacent to the volleyball courts.

The FAA is very finicky about where you can and can’t fly. Generally, this works out to staying away from airports, people, national parks, state parks, local parks, parking lots, any real estate owned by the Bureau of Land Management, congressmen, senators, governors, and the President of the United States. The Secret Service being very particular regarding the later. Suffice to say that flying a drone is highly regulated. And if you use a drone to earn a living, the FAA insists that you obtain a drone pilot’s license to demonstrate knowledge of different classes of airspace, pilot radio communications, weather information such as METARS, PIREPS and SIGMETS; and physiological factors in pilot performance (even though you happen to be standing with both feet on terra firma). After you learn all of this, you need to schedule at a testing facility where, before entering, you remove your shoes and belt. Fortunately, I don’t use my drone commercially, so my only requirement is to register the drone with the FAA.

Avoiding flying over hundreds of people was a challenge during this adventure, exacerbated by the fact that most of them were highly intoxicated, some of them asked me to take their pictures, and many of them wanted to interview me while the drone was in the air. Conveniently, Lummus Park, located between the Atlantic Ocean and Ocean Drive, provides secluded patches of grass to launch and land. Having had several conversations with various Miami police officers as well as South Beach Parks and Recreation, and knowing that I did not plan to strafe pedestrians down the length of Ocean Drive, I was good to go.

Nevertheless, at one point during one of my attempts (yes, there were multiple attempts) the only feasible launch point through the palm trees was directly adjacent to a parked Miami Beach squad car. Despite my previous conversations, this made me a bit queasy. After carefully stalking the squad car to ensure no officers were inside (be very careful how you do this), I stealthily slipped behind the cruiser’s starboard stern to launch. Upon landing, I noticed the vehicle’s officer casually leaning over the trunk, watching me. Intently. Visions of spending the night in a cold jail cell with people I did not want to know immediately flooded into mind.

When encountering authorities in any public situation it’s important to maintain a confident demeanor. Despite this rule, I found myself blurting out uncontrollably, “Everything’s under control officer. I’m flying very safely and not over any people.” The officer shrugged and continued to watch as I landed the drone. He did not notice my sweaty palms, nor my lips reciting my favorite Psalms.

Before proceeding to the details of this adventure I’d like to present an allegory that sets the stage. The following excerpt is from the Marx Brothers film, Night at the Opera, where Chico explains how they flew to America:

“Now I tell you how we fly to America.

The first time, we get halfway across when we run out of gasoline. We gotta go back.

Then we take twice as much gasoline. This time, we were just about to land, maybe three feet … when, what do you think, we run out of gasoline again. Back we gotta go and get more gas.

Next time, we take plenty gas. We getta halfway over when, what do you think happened?  We forgot the airplane. So, we sit down and talk it over. Then I get the great idea. We no take gasoline. We no take the airplane. We take steamship.

And that, friends, is how we fly across the ocean to America.”

At this point I know what you’re thinking: “I really need to trim my nose hairs.” OK. OK. Let’s get at it. With that allegory in mind, here are my three attempts to capture night shots of South Beach.

1. The first time, I drive from Fort Myers to South Beach (2 hours and 30-minutes one way). I search for a parking spot. (Note: it is easier to win the Powerball lottery than it is to find a parking spot in South Beach.) I spend about two hours walking the length of Ocean Drive capturing my images. I return home only to discover 100+ blurry shots—resulting from incorrect camera settings, too stiff an ocean breeze, too stiff a tropical drink, or combination thereof.

2. Several weeks later, I again cross Alligator Alley over to South Beach. I search for a parking spot. I walk to a semi-secluded site in Lummus Park and launch. This time I remember to flick the drone controller into ‘tripod mode,’ which provides more stabilization. Ha, I think he’s got it! I fire off a series of perfect night images of Art Deco architecture. Inflated by a smug aura of success, and with a confident smirk of bemusement, I prepare to return the Mavic to its circular landing pad. In the confusion of the night, and admittedly somewhat dazed by endorphins of accomplishment that come from years of semi-professionalism, I accidentally tap the ‘Home’ button on the controller.

The Home button does indeed bring the drone back to its original launch site: linearly, directly, from point A to point B. Unfortunately, a tall palm tree stood between the Mavic and ‘Home.’ Dear readers, the sound of an $1,800 drone attacking the fronds of a palm tree 30-feet in the air is as unpleasant as it is indescribable. High-speed rotors attempted to chop their way through palm fronds that have perfected their defenses over hundreds of millions of years. The drone fought the palm tree, and the palm tree won.

The Mavic plummeted to the earth. While acting like this was “normal” to the gawking bystanders, and while suppressing the impulse to fall on my knees and weep uncontrollably, I futilely searched the ground for the missing rotor blades. Alas, the blades were nowhere to be found. They had spun off to Iowa. I picked up the drone and headed back to the car for my trip home.

Upon closer inspection in the light of the next day, I discovered that several arms had fractured (the drone’s; not mine). This required what the drone industry refers to as “professional repair.” In a disturbing twist of fate, the closest authorized repair facility was a company called Drone Nerds located in … Miami.

3. Many weeks and several hundred dollars of repair work later, I again cross Alligator Alley over to South Beach. I search for a parking spot. I walk the length of Lummus Park to shoot 100+ perfectly exposed crisply focused night shots of Ocean Drive’s Art Deco architecture.

And that, my friends, is my adventure of Miami’s South Beach night shots. In addition to the two images I submitted for the Fstoppers Night Photo Contest, here are a few more … 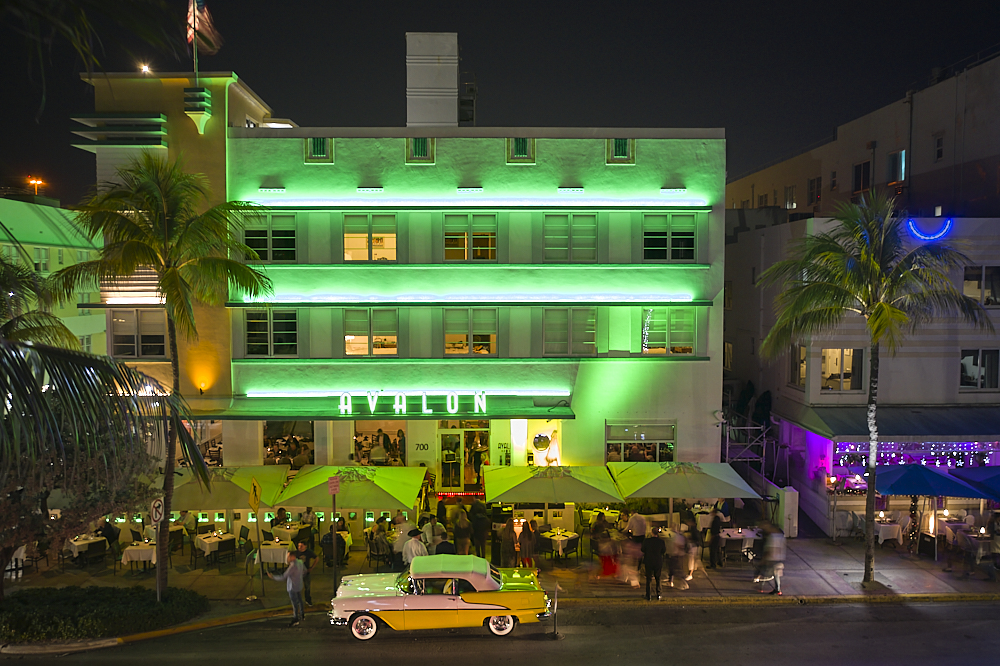 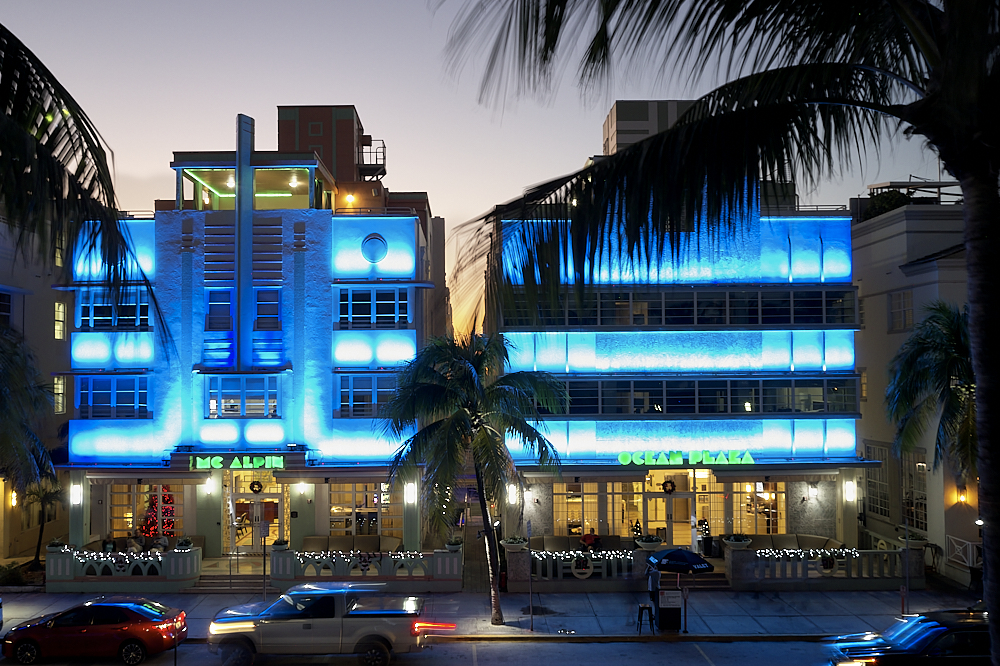 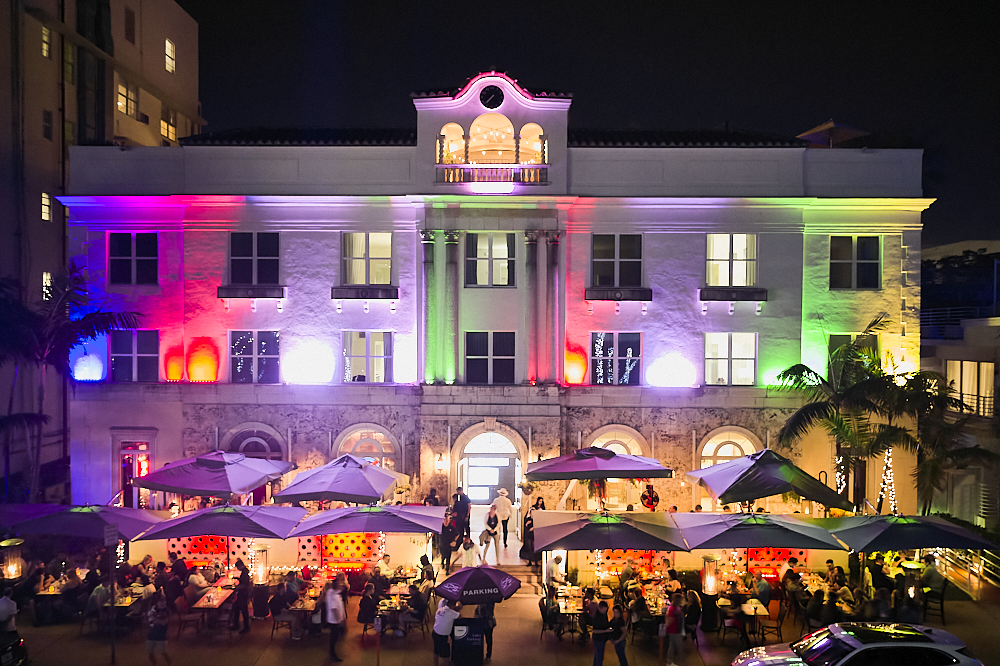 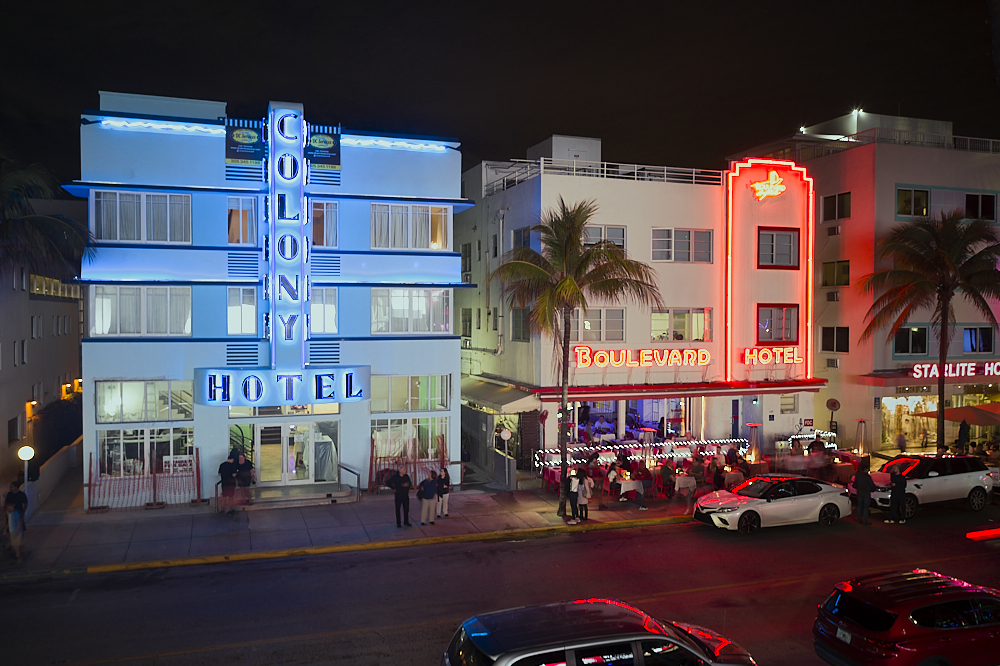 Thanks for being a loyal Adventures fan. Please consider:

How I staged the shot. 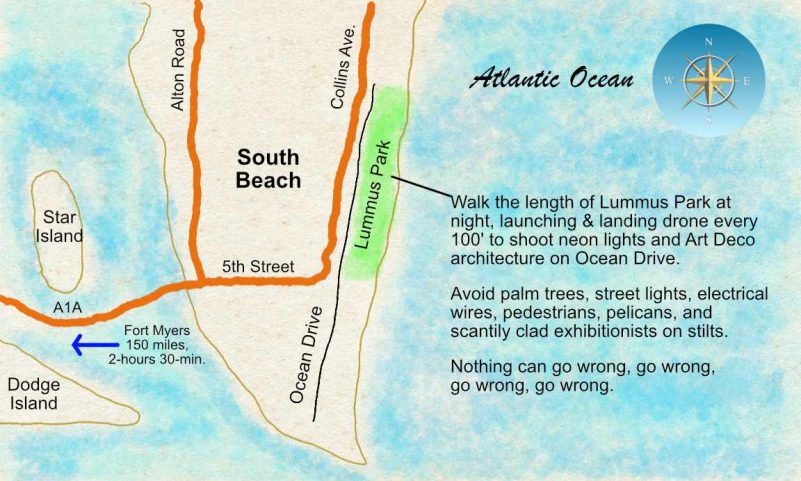