What good is a photography blog without discussing gear? Gear is the main topic for all male photography bloggers. As I wrote in my original article back in February, 2021, Early Morning Musings …

“There are probably tens of thousands (hundreds of thousands?) of photo blogs online. Most of the photography blogs are written by men, and most of their subject material is about camera gear and technical issues: the latest camera models, everything you need to know about aperture in two-minutes, lenses that don’t focus well at F16 because of certain atmospheric pressure anomalies at 10,000 feet. And more.

While discussing gear and technique is probably inevitable in a photography blog, what this won’t be is yet one more lens review, advice on upping your technical game (OK, maybe a bit of game-upping), or a comparison of the latest camera bodies. That market is infinitely saturated.”

I get some credit that I have gone nine months without a gear article. However, the inevitable is now upon us. Today, my topic is the GoPro camera. If you’re not familiar with GoPro, I defer to the definer and diviner of all universal knowledge, Wikipedia …

I’m uncertain what “the connected sports genre” is. I think it means that, after videoing your adventure, all of your limbs and mental faculties are still connected. In addition to “connected sports,” GoPro positions their product line as “the world’s most versatile cameras.” These cameras are indeed amazing. Out of all the cameras I have previously and currently owned—the combined value of which could have funded a formidable army in a third-world country—the GoPro is the most awesome because of its size and capability. (Here, my board of directors insists that I state I have nothing against third-world countries—or private armies, for that matter.)

The GoPro packs a 1-inch sensor into a form factor about the size of a pack of cigarettes. And it weighs only 5.6 oz. (including battery). It shoots still images, 4K video, slow motion, high speed, and is waterproof to a depth of 30-feet. 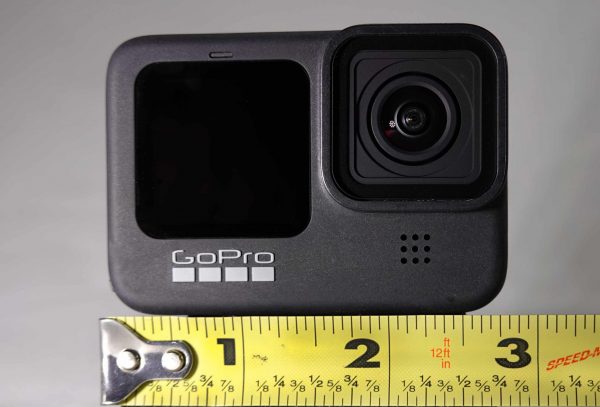 Another way that GoPro positions their product as an “action camera.” Here is a photo that demonstrates how an action camera actually works:

The GoPro Action Camera in Action 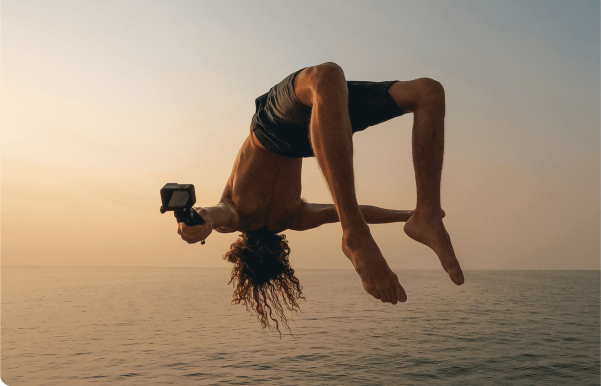 In the above image we see a fellow flipping 360-degrees, backwards, 20-feet in the air, into the ocean, while videoing himself holding his GoPro in his right hand. By definition, therefore, an “action camera” is designed for the young, the beautiful, the skinny, the flexible, and the athletic.

Because I am not young, beautiful, skinny, and flexible (I do consider myself to be, relatively speaking, somewhat athletic), I think of my GoPro more of a ‘special effects’ camera more than an action camera—because my action days, relative to the typical GoPro user above, are over. More specifically, if I were able to arch my back into the same position as this fellow, followed by the water impact, the first responders would hopefully find and follow the instructions on my dog tag: “If I am unable to move, take me to my chiropractor, Dr. Snidely Whiplash.”

The camera’s versatility isn’t just its light weight and small form factor, but also the erector set array of connectors that allow you to mount it to virtually anything: surfboards, skis, vehicles, people, pets, etc.

GoPro Connectors
(Most Connectors Shown Below Not Included with Camera) 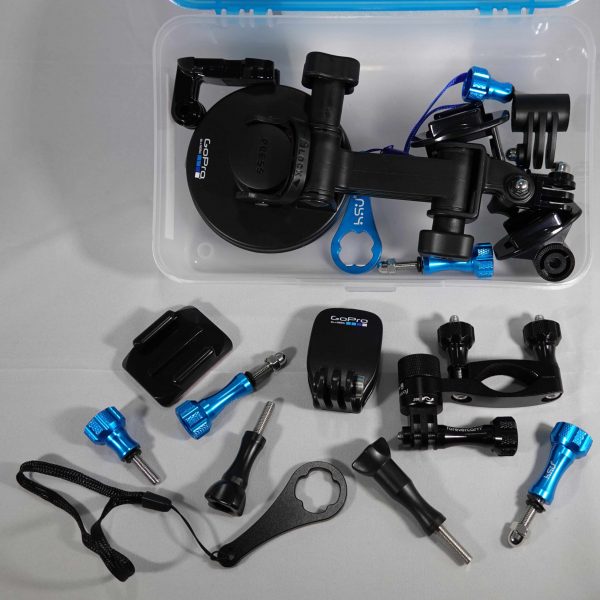 There are many uses for GoPro action cameras in addition to backward flips into the ocean. For example, surfers affix their GoPro to the tip of their surfboards while surfing 100’ waves on the North Shore of Oahu. Kayakers clip GoPros to their helmets while going over Niagara Falls. Backwards. Several climbers have attached GoPros to their helmets while summiting Mt. Everest. Skiers attach GoPros to the tips of their skis while schussing black double diamonds in Sun Valley. (I once accidentally found myself on the black double diamond moguls of Sun Valley. It required four days to safely side-step down the mountain.)

I certainly could do all these adventurous activities to showcase my GoPro. I simply choose not to. I am not the least bit defensive when some people read this and think that I can’t actually surf the North Shore of Oahu—or that some people think I can’t surf, period. Or that some people think it’s odd that I still have a driver’s license. No. Social derision does not phase me in the least.

The point is that these are unfair demonstrations for the average person who can’t do these activities. Or, like me, simply choose not to.

Consequently, to demonstrate my GoPro action cam with a typical daily event, in a safe environment, with an activity that anyone can duplicate, I have strapped it to our robo vac Eufy.

Before we start, a few technical terms are in order.

With these terms in mind, let’s view the GoPro riding Eufy around the house. For those of you with limited attention spans, I have captured the video in time warp mode. Also please note, because Eufy is designed to fit under the furniture, I had to shepherd this vacuuming session to ensure that Eufy did not decapitate the GoPro while attempting to slide under the couch. Thus, you may occasionally see a dowel rod inserted into the scene as an anti-decap, half-caf with foam safety precaution. Despite my shepherding, I scored two decapitations. Sheep with real shepherds are counting their blessings.

If that didn’t sufficiently get your heart rate up, here are several additional real-world examples from our recent trip to Santa Fe, New Mexico.

In this next example, she who is my wife, The Beckster and I are climbing down ladders at Bandelier National Monument’s Pueblo cave dwellings. I have the GoPro strapped to my head with an official GoPro accessory called “The GoPro Head Strap,” which is demonstrated in the photo below.

Warning: the GoPro Head Strap is is exponentially more geeky than the headlamp I demonstrated in my Naples Florida Old Pier adventure. If, for example, you’re videoing your morning neighborhood walk with this device, neighbors may attempt to have you committed to a mental institution, which today is more kindly referred to as a ‘mental health care facility.’ My advice: it is better to use the official GoPro Head Strap than it is to concoct your own head mount with torn up sheets or left-over bandages. Whatever direction you decide to take, my strong advice is not to mumble to yourself while in adventure mode. Lest they come to take you away. (Ha. Ha.) 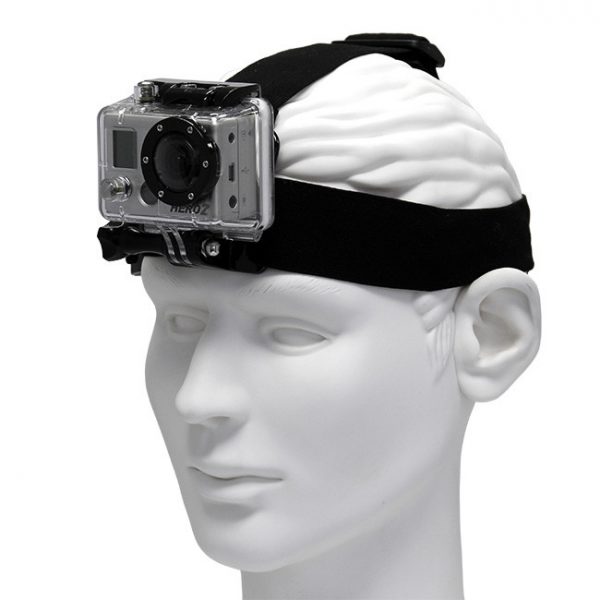 In this video demonstration, I am following The Bekster down a ladder from Alcove House, when I accidentally step on her hand. As I indicate in the video, “this is classic GoPro footage.”

In this next demonstration, I have affixed my GoPro to the hood of our rented car with an enormous suction cup to capture our descent down through the Santa Fe National Forest via New Mexico Route 4 to the turnoff at Los Alamos. Here, 15-minutes have been condensed to about 30-seconds.

As you can see, the GoPro camera is a versatile, lightweight, high-resolution, action camera for capturing video, still shots, or virtually any kind of special effects of your most awesome adventures!

My sincere appreciation to you for being a loyal Adventures fan.

Checking Your Images for Detail