Last July 2021, after many months of continuing Covid lockdowns, when it looked like some light at the end of the lockdown tunnel, the Beckster and I decided to take a trip to Santa Fe. Turns out the timing was a wonderfully lucky break between the Delta and Omicron variants.

Bekki has always loved the colors and warmth of the southwest desert, and I had never been there. So, it was off to Santa Fe for four days.

Founded in 1610, in Spanish meaning “Holy Faith,” the capital of New Mexico is both the oldest as well as the highest altitude (7,199 ft.) state capitol in the U.S. I’m not sure how Santa Fe became the oldest state capital, given the head start by original 13-states. But yes, it capitalized (invented word here) before Massachusetts (#2 in 1630)—and all the other states that you’d think would be at the top of the list, such as Maryland, Delaware, and Virginia.

Located an hour northeast of Albuquerque, almost two hours southwest of Taos; and nestled between the Carson National Forest to the west, and the Santa Fe National Forest to the east, Santa Fe is also considered to be one of the world’s greatest art cities, “with over 5,000 artists living within the city limits, year round arts events, and numerous art institutions including 10 museums and 100 galleries.” 5,000 artists living in within the same 37.4 square mile area equates to approximately 33 artists every ¼ mile (square). This is how they came up with the phrase “starving artists.” One source suggests that the city is the third largest art market after New York and LA.

The 100 galleries include the Georgia O’Keeffe Museum, which we both enjoyed one morning.

Preparing for any trip starts with a careful plan for what photography gear to take. Because I shoot both stills and video, this usually ends up including:

To this, my professional photographer friends say, “You’re carrying too much stuff!” To which I respond, “Never!”

You read about those famous street photographers who stake out a street corner for ten hours a day, seven days a week, for ten years. For most of us, it’s more like getting a few shots in between pomegranate slushies.

Even though I am well-researched, by necessity I scale my expectations by categorizing photography travel into two distinct types of excursions:

So, like most of our travels, Santa Fe in July of 2021 was definitely a scaled-expectations travel shoot. 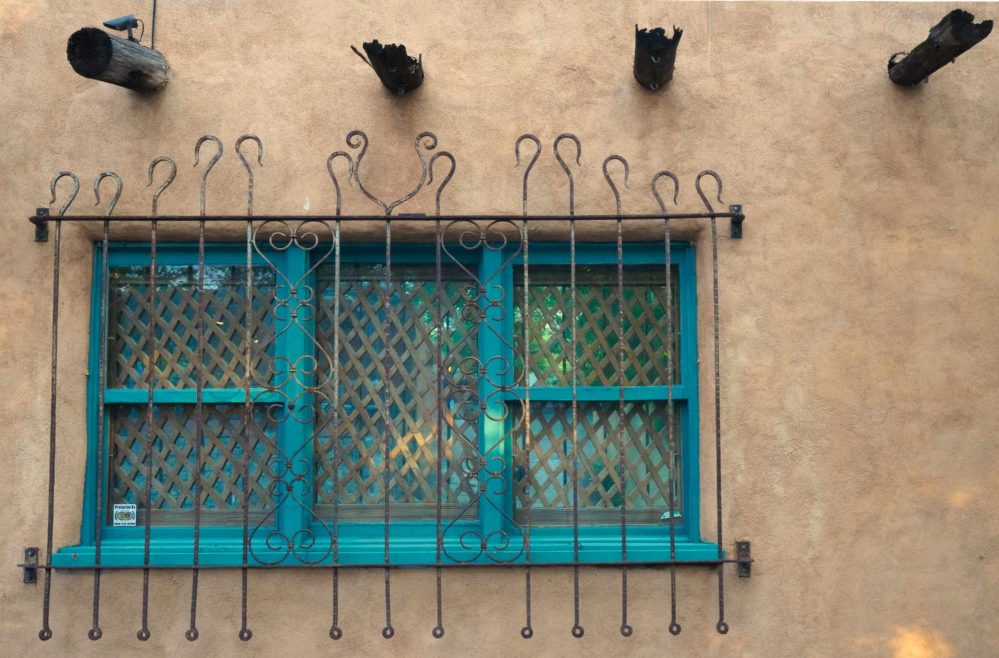 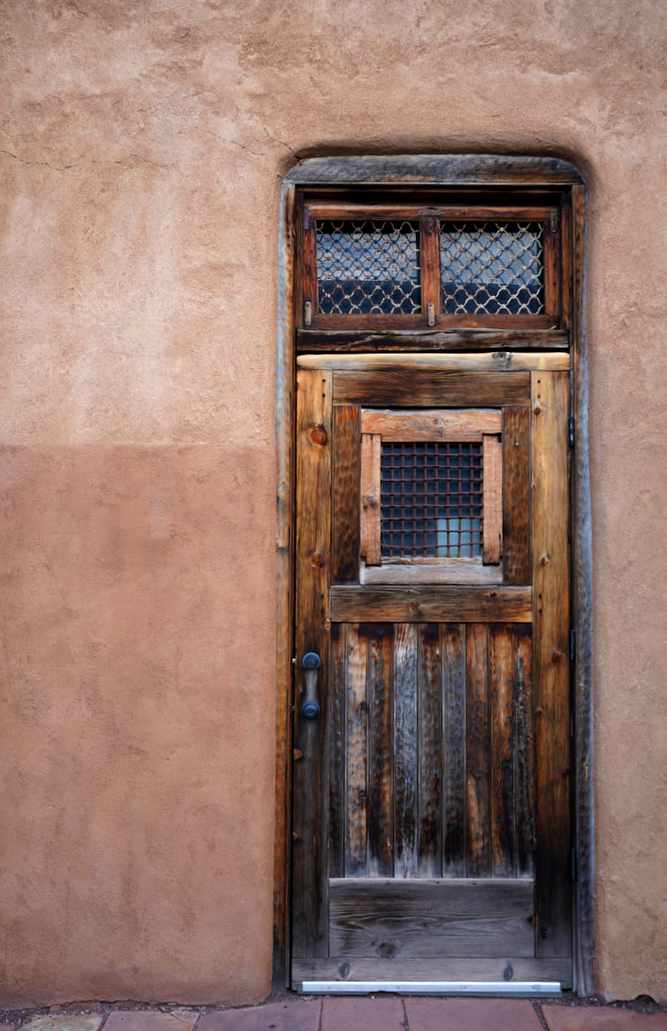 The Inn and Spa at Loretto

Here’s an example of contemporary Santa Fe adobe architecture from the Inn and Spa at Loretto, a boutique, luxury Santa Fe hotel that celebrates the authentic Southwestern style and culture of New Mexico. 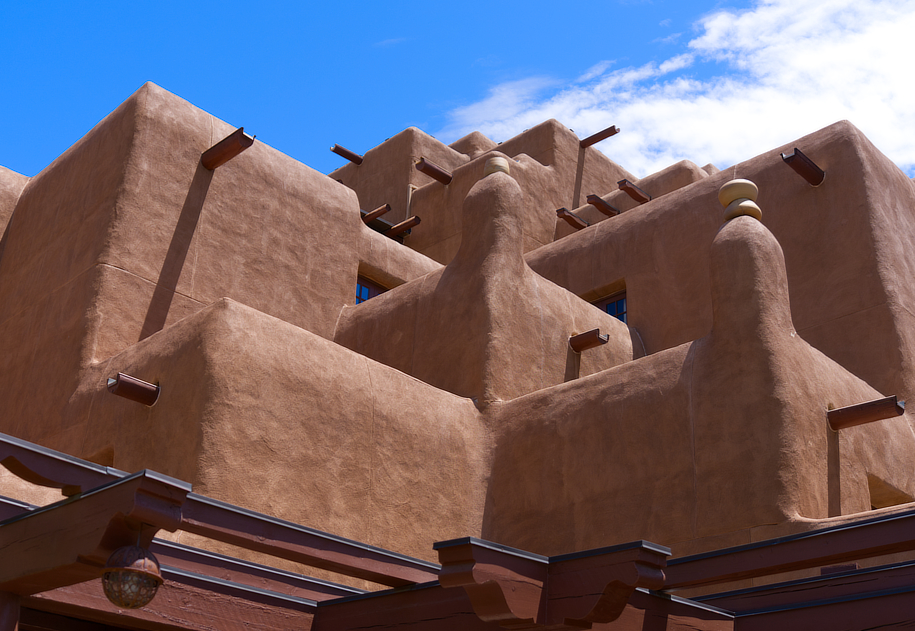 Both mountains and plains define New Mexico’s geography. About 40-miles west of Santa Fe, in the Santa Fe National Forest, the National Park Service manages the 89,000 acre Valles Caldera National Preserve. Located atop the Jemez Mountains, a volcanic eruption 1.25 million years ago created this 13-mile diameter depression. Because the caldera is dormant (but not extinct), signs of volcanic life abound with hot springs and boiling sulphuric acid fumaroles.

Here, I caught an afternoon rain shower passing through the caldera. 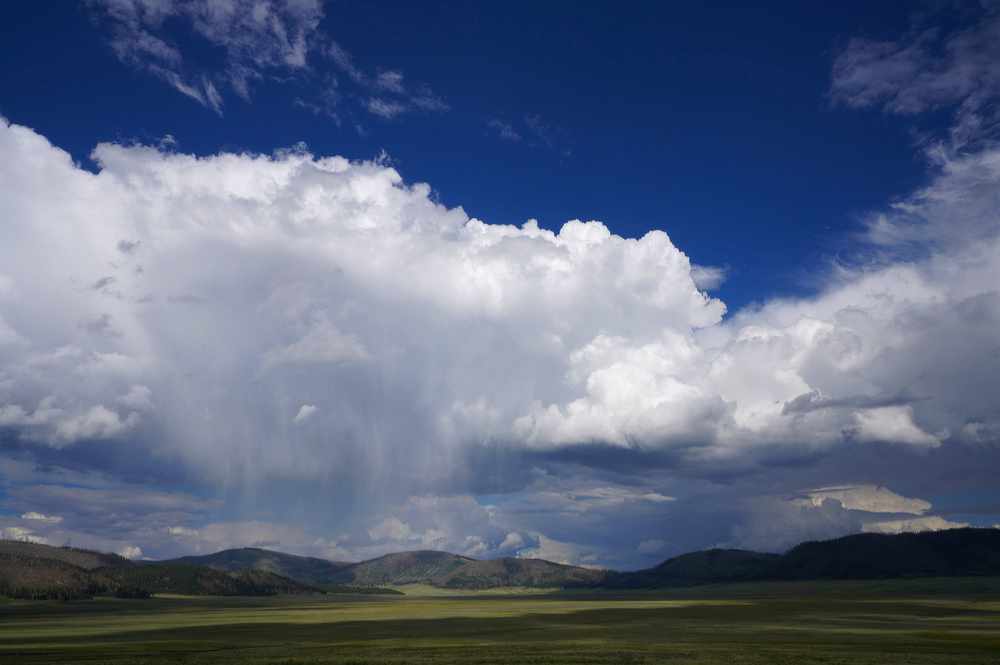 La Fonda’s western facing rooftop bar offers spectacular views as the sunsets over of the western Jemez Mountains. After asking permission to squeeze into a corner of the rooftop bar with my tripod and Sony 100-400 mm GM lens, and careful not to disturb the customers, I shot away for over an hour hoping for a golden sun touching the peaks just as the sun set over the mountains.

My imagined shot never appeared behind the thick layer of clouds that never went away, but only darkened over time. All I got were darker shades of gray. The best shot appeared in the first 15-minutes proving that: you can’t always get what you want. But if you try, sometimes you might get something interesting that you never anticipated. 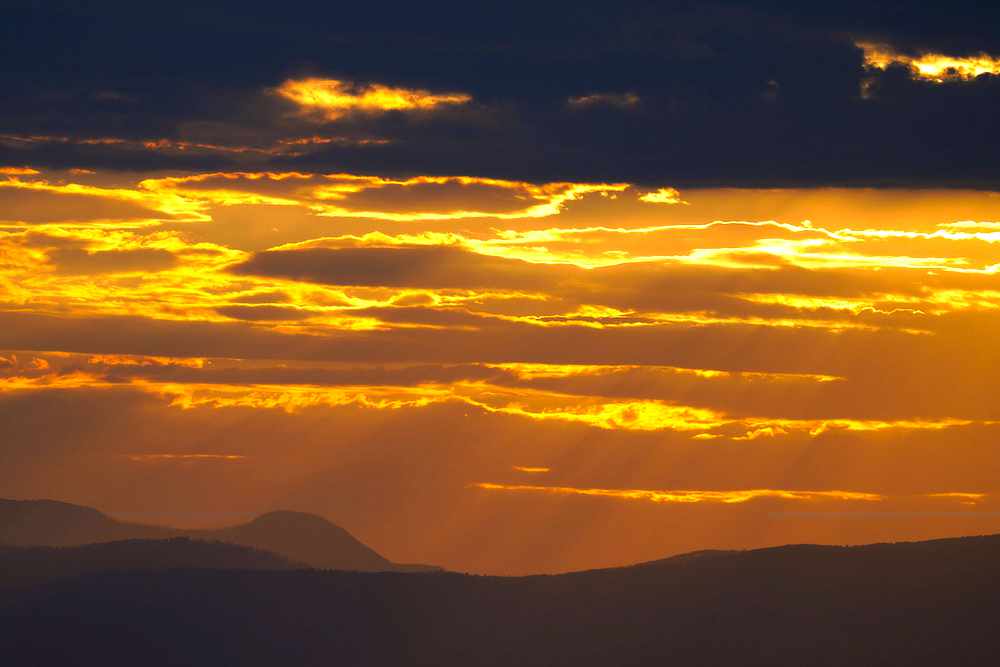 Santa Fe turned out to be a typical photo shoot within the context of a happy family trip. No award-winning photos, but some nice keepers.

Thanks for Being a Loyal Adventures Fan

As always, thank you for being a loyal Sage Adventures Fan (with all of the rights to which you are entitled by membership).